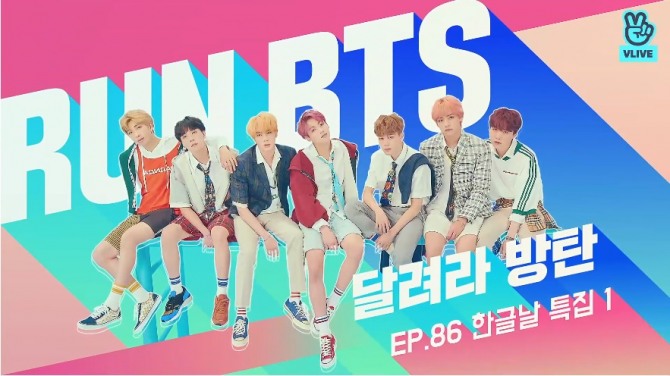 BTS returned after a month-long hiatus for a Hangeul Day-themed episode of “Run BTS!”

Sitting at tables inside Seoul’s Oil Tank Culture Park, where an Armypedia event was being held, the performers said that in honor of Korean Alphabet Day, they would refrain from using words borrowed from foreign languages.

“Okay,” J-Hope replied confidently, quickly covering his mouth when he realized he had just used one.

Then they started a series of questions related to pure Koreans. Despite a number of clues, all seven failed miserably to guess the answer to the first question to which the Korean phrase amounted to “To your blessings.”

For the second question about the dialect used on Jeju Island, they were given a clue from their movie “Bring the Soul” and everyone managed to get the answer except Jimin.

Jimin gradually got nervous as he continued to ask the wrong questions. After failing to answer eight questions correctly, he asked his group mates if anyone was willing to share the reward. But he was elated when he finally managed to answer questions 9 and 10.

NCT Dream’s Jeno broadcast live on the way home after his regular host for a music ranking program.

“I don’t have time today, I’m afraid. The ticket (sale) for our concert starts at 8pm, so I’m going to turn it off at 7.50pm to give you ten minutes to prepare to buy, ”he said, wishing them good luck.

When fans asked him for clues as to how the band was preparing for the gig, he laughed and said they were asking the wrong person.

“I will never give clues,” said the idol.

To a fan who said the concert falls on his birthday, he promised he would sing a happy birthday song if he heard anyone screaming unless they were in the middle of a performance.

NCT Dream will not be able to go live once ticket sales are over, he said, adding, “Renjun and Chenle have gone to China and are probably on the flight home.”

AB6IX’s Lee Daehwi spoke to fans while helping himself to the chicken.

“I’m not used to eating alone yet,” he confessed, opening the box of drumsticks, his first meal of the day.

Before digging, however, he thanked the fans for their huge support for the group’s new song “Blind for Love” which was released the day before through a storefront. His mother and nephew were also present at the event, he said.

“I spent many awake nights working on it, so it was even more rewarding,” said the singer-songwriter.

Savoring every bite, he said many told him to eat right and gain weight.

Lee also told fans that he will have to take his weekly V Live segment on hold after his presentation, to focus on the performance of the new album by asking them to understand.

GOT7 recaps fan meeting in Bangkok

GOT7 looked back on their recent fan meeting event in Bangkok.

The footage began with Yugyeom training for his solo scene with a dance team.

“This is the first time that each of us has presented solo performances one by one. It is also a challenge for us and we do our best not to disappoint our fans and to entertain everyone, ”he said.

On the plane before take off, the youngest member asked Jinyoung, who was sitting next to him, about his next performance.

“I am afraid of myself sometimes how good I can be,” Jinyoung joked with a straight face.

After a rehearsal the day before, Yugyeom, the first to kick off the three-day event, told the camera he was convinced he would just have to do as he had been. trained.

“My voice is still a little stuffy, though, and that’s my only concern. But with our fans there, I’ll be able to enjoy the scene,” he said, asking fans to cheer on the group.

As he predicted, he had fun with the fans, but when the rest of the band joined him later on stage, he confessed, “I was a little nervous without you.”

Naver’s V live streaming app allows fans to interact with their favorite K-pop stars via live broadcasts. The app is available for Android and iOS. For more information, visit http://www.vlive.tv.

By the Korea Herald ([email protected])