It’s a good time to be a fan of puns. Every few weeks, a new standout genre arrives, ready to accompany you to the next big hit. Now App Store superstar Zach Gage (Unify [$1.99/Free], bit driver [99¢], Halcyon [$1.99]) threw his hat into the pun ring with spell tower [$1.99] . Those of us who fit the Venn diagram intersection of iPad owners and pun fans benefit – spell tower is stylish, smart and fun.

Not that it’s entirely unique. We’ve all played a number of games that use SpellTower’s chief mechanic. Presented with a grid of letters, you spot a word and trace a path through its letters to select it. You can trace in any direction, loop diagonally across your path, and make words of any length after two. And if that was all there was to it, it would be a yawn and a jump. But it’s not. 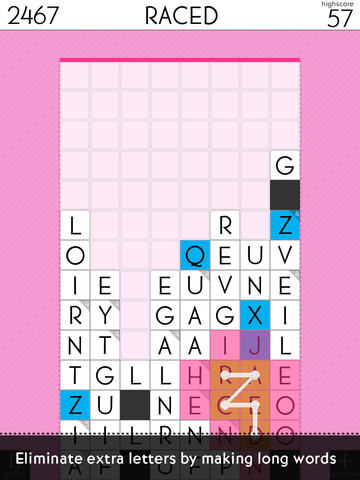 spell tower isn’t bogged down by complicated rules or conditional abilities. The tutorial is just a handful of screens expressing a handful of simple rules. You can create a word as long as it is in the in-game dictionary and is at least three letters long. Words of five or more letters erase the letters all around them. You can’t do the same word twice, and if a letter has a number, it must be used in a word of at least that length. Finally, rare letters like Z, J, Q, and X erase their lines if used in a word.

These rules will guide you through SpellTower’s four game modes, which change the layout of the board. Tower mode gives you 150 letters to earn the highest possible score. Puzzle mode adds a row to the board each time you make a word, and if a column reaches the top, your game will end. Extreme Puzzle mode follows the same rules, but requires longer words faster and more often. Rush mode adds new lines over time, putting you on the clock. 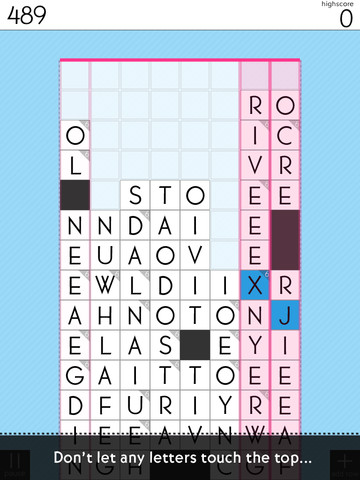 Seems like only Rush mode puts pressure on you, but it’s one of the most tense puns I’ve played. Tower mode can be played casually, certainly. You can just agree to find a certain number of words, then hit the “done” button and wipe your hands clean. But can you just leave towers of letters standing there, unused? It’s beyond me, so every move I make is a balancing act between finding good high-scoring words and making sure I don’t leave too many orphan letters. At least you don’t have to worry about making mistakes – there’s no penalty for words that don’t work.

In Puzzle and Extreme Puzzle, however, this tension is escalated to the nth degree. Since every move you make adds a new row to the board, you need to consider your moves very, very carefully. Almost inevitably, you’ll be stuck with one or more rounds of single, orphan letters, and as these add up, it becomes harder and harder to make a move that won’t prematurely end your game. These modes should not be played quickly.

Rush mode, on the other hand, should be played at full speed. Except, of course, you still have to weigh the potential of your moves to leave those orphan towers. But it’s a cathartic mode after playing Puzzle too long. It’s tense, yes, but not every move has the potential to be fatal.

These four modes offer a variety of satisfying playstyles, and it looks like Zach Gage has plans for more to come. Also comes the Game Center achievements. Leaderboards are already there, but achievements need to score things like completely clearing the board in Tower Mode. If I ever succeed, I’m going to want to be able to smugly show off my verbal superiority. A few other small touches could help the game, like a more obvious way to end Tower mode and a score breakdown.

But spell tower is already a complete package, brought together by the use of cheerful colors, simple patterns and elegant typography. It’s a shame it’s only for iPad owners for now, but if you can get it back, you should. And if you have any ideas for other modes you’d like to see, you can share them with the developer in our thread. Assuming you can find the words, of course.