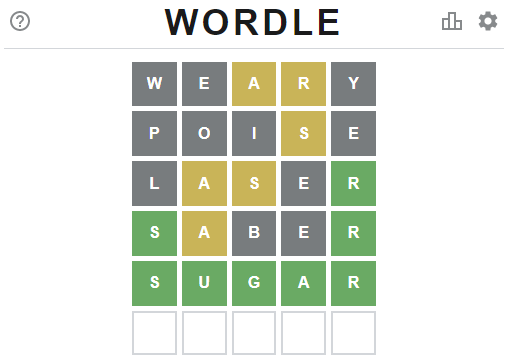 Did you Wordle-d today? The popular word puzzle also has a Malaysian version

Have you noticed the yellow, green and gray grids that have been shared on social media platforms like Twitter and are curious to know what it is? Well, these are the daily records shared by Wordle, a word puzzle, players.

Since its launch, the global puzzle game has seen explosive growth – from 90 daily users in November to 300,000 in January and up to two million last weekend.

Its popularity has even prompted a Malay version of the game, called Katapat, which is a portmanteau of “Kata” and “Tepat”.

And, the puzzle genre looks like a Ketupat if users correctly guess the words within a few tries.

Katapat (http://projecteugene.com/katapat.html) was released on January 22 and has already attracted over 2,500 users in three days. “

My friend thought it was a fun thing to share with others, but we didn’t expect it to go viral so quickly,” says Ketapat creator Eugene Low, a 32-year-old app developer.

Although Low developed the game by reproducing code from Wordle with permission from Wardle, the game would not have been possible without the help of his friends and family, who came out with the name, logo, Malay word list and translations so Low can bring the game to fruition.

“It’s just nice to have a version closer to home while being carried by the hype of the Wordle. It’s nice to see everyone enjoying it as much as I enjoyed creating it with my friends,” says Low.

What is Wordle and why is it so popular right now?

Wordle is a word puzzle created by American software engineer Josh Wardle as a gift for his partner Palak Shah, who loves word games and crosswords. This is a web-based game and no app or software download is required.

To play, simply go to the site: www.powerlanguage.co.uk/wordle/

Similar to the board game Mastermind, the rules are quite simple.

Each player must guess a new five-letter word every day in six tries. For each word you guess, the game tells you how many letters you guessed in the “word” of the day, with each letter on its tile turning yellow, green, or gray.

The game is basically a process of elimination where users guess the letters and their locations. Although simple, the game can be very difficult.

Wordle’s massive popularity can be attributed to its simplicity. Although there are many outdoor games that require players to spend a lot of time to level up, Wordle is only scheduled to be played once a day. The game is a breath of fresh air as it has no push notifications, email sign-ups, pop-up ads or banners.

Best of all, free.

“The game is humble and it doesn’t fight for attention like any other app or game. It’s addictive in a good way because there’s a form of gratification that feels more honest and rewarding I see myself committing to it for a long time,” says Omar Kasturi, a 26-year-old designer.

“It’s something that encourages you to spend three minutes a day. And that’s all. Like, he doesn’t want more of your time than that,” Wardle said in an article for the New York times.

But ultimately, the buzz surrounding the game may be due to its current hype on social media, with users sharing their daily Wordle results on Twitter, Facebook or with their friends.

“I’ve seen people share their results online (green and gray cubes). I was curious about it, that’s why I tried it. Since you have to wait a full day before guessing a new word, it fuels my anticipation for the next day,” says Janna Lee, 23, audit partner.

2022-01-26
Previous Post: If you have completed Wordle today, try these similar games
Next Post: five other great free word games